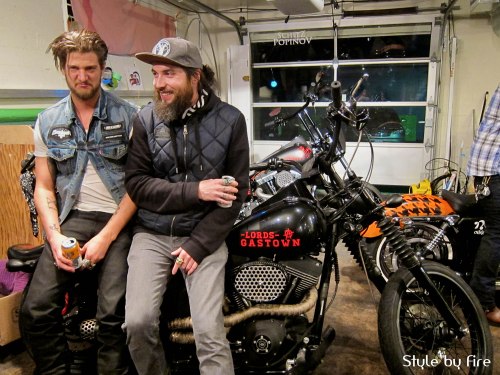 Local lifestyle apparel brand Lords of Gastown (LG) held a soft opening of their brand new showroom on January 30 and 31 in East Van, and Style by Fire was there to check it out.  I was aware of LG but their target market falls outside my usual circles so I wasn’t entirely sure what to expect when I ventured into their hidden lair. 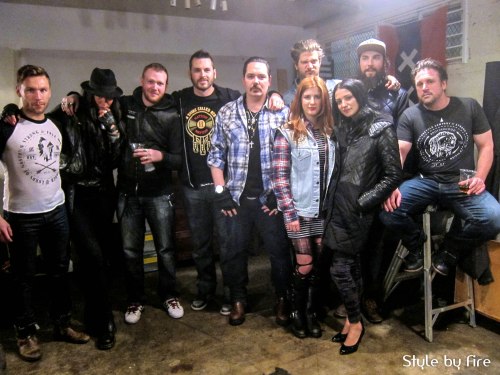 There was an intimate crowd of mostly guys in denim and black leather hanging out, chugging back beer and chatting on top of groovy tunes.  I felt like I had walked into someone’s house party.  Everyone turned around to look at me; it was obvious I was an outsider.  I introduced myself, and the next moment found myself being welcomed with open arms, my hand holding a pale ale, and being taken on a tour of the new digs. 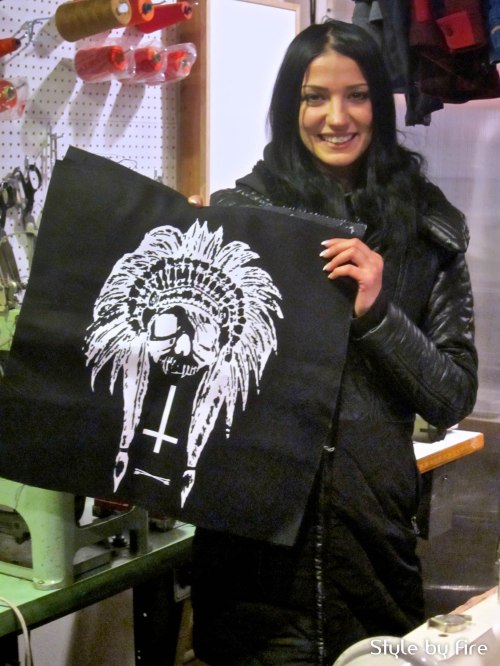 The LG Compound is called a compound for good reason – the showroom is only one part of the space, and it seamlessly blends into the garage which is used to customize and repair motorcycles.  Right beside the garage is the production area with a screen printing machine and sewing machine where the Co-Designer/Head Seamstress Jill Kacic works.  Down the hallway from the showroom is a spacious bar and lounge area, as well as tattoo parlour.  It became clear that LG is about fostering the motorcycle lifestyle and community by building a one-stop home for its enthusiasts to socialize in and have both their personal style and that of their bikes taken care of. 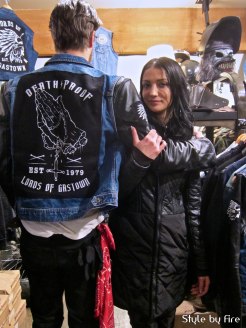 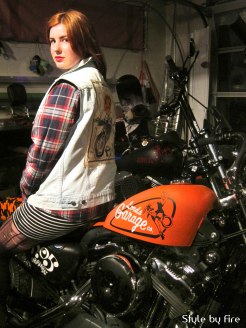 Who are the Lords of Gastown?  Tyler Hazelwood and Nik Dean, both 34, are long-time friends and share a passion for motorcycles.  They both lived in Gastown and had their routine bars where they hung out on a regular basis, which is how they got the nickname Lords of Gastown.  As a joke, they started getting t-shirts made with this name emblazoned on them.  Before long, their friends also wanted to wear these t-shirts.  They started discussing clothes and what they wanted to see available to buy, which led to designing their signature ‘True OG’ jacket in 2009.  With the help of Kacic, they started producing this jacket which features leather sleeves, denim body and black patch on the back featuring the LG graphic.  Soon they started picking up vintage jackets and re-working them the LG way, sewing on patches and altering the sleeves, etc.  Their popularity grew rapidly, leading them to expand their repertoire of apparel to include hoodies, tank tops, toques, and vests.  They began collaborating with other brands and artists, including LA shoe brand Pskaufman with whom they co-produced a limited edition line of leather boots.  Hazelwood and Dean’s mothers have even jumped onboard to help with producing a side line of children’s wear with miniature versions of the adult apparel. 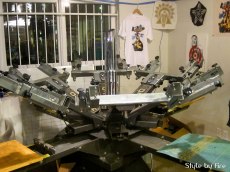 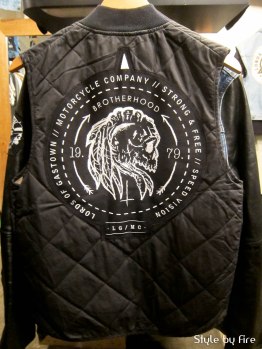 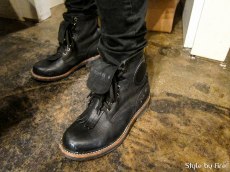 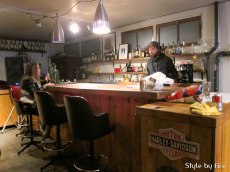 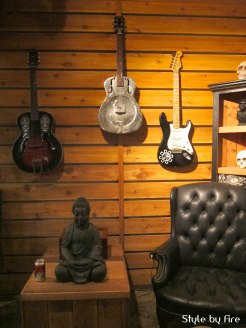 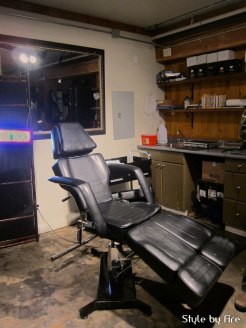 LG caught the eye of iconic motorcycle brand Harley Davidson, who has picked up the apparel line and now carries it in its Langley, Kamloops, and Edmonton dealerships, with plans to expand to eastern Canada and overseas.  The demand for stock and customized pieces has created the need for the LG Compound to showcase their products to potential buyers.  Kacic is now training a team of seamstresses to take over some of the production work.  What started out as a silly joke amongst drunken friends has grown into the beginnings of an empire – LG is a prime example of the ‘follow your passion and the money will follow’ school of thought.

Besides LG’s astuteness in tapping into a niche in the apparel market, it’s the team’s warm openness that impressed me.  These motorbiking aficionados are affable and laidback, care about aesthetics and design, and look stylish while cruising their Harleys around town.  They made me want to own a bike of my own just so I could hang out at their digs and talk shop with the boys.

The LG compound is located at 49 Dunlevy Avenue in East Van.  Their apparel can also be found locally at the Menu Skateboard Shop in Gastown, as well as online.